Scroll
Merry Christmas and a Happy, Healthy 2021
Photo trip during the Covid-19 pandemic 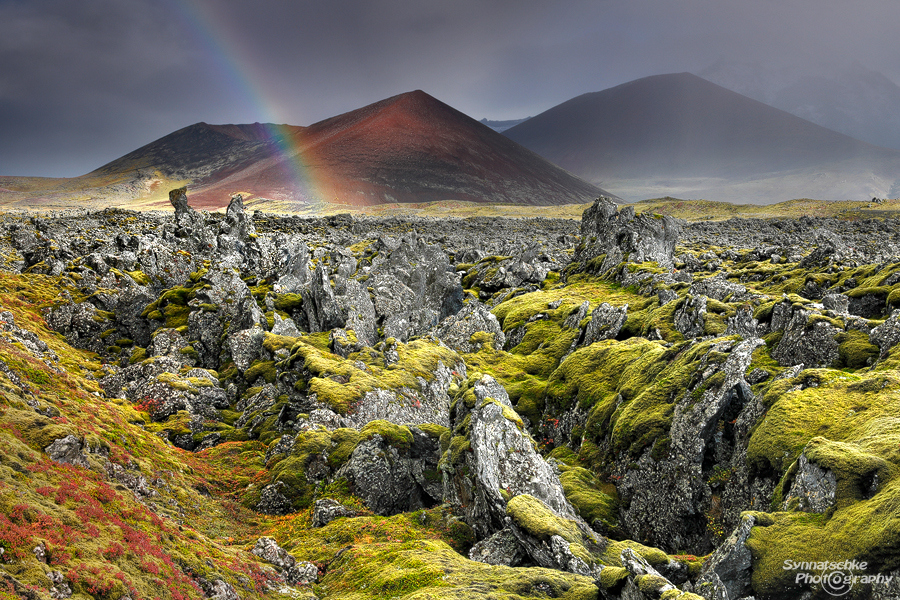 Autumn at Berserkjahraun - Iceland at its best

This month's image was taken during our last photo trip to Iceland. It shows an early winter storm hitting Berserkjahraun, one of the many hidden jewels on Snaefellsnes peninsula. In fact this place is not really "hidden", but it is still kind of underrated and rarely visited by tourists despite being located quite close to famous Kirkjufell, surely Iceland's most photographed mountain. A gravel loop road (#558) runs right through the heart of Berserkjahraun and both ends are clearly signposted along Snaefellsnesvegur (#54) between the towns of Grundarfjördur and Stykkishólmur. It is narrow but usually well maintained and suitable for passenger cars during the summer months. As soon as it starts to snow it turns into 4WD track. The west entrance (64.95607, -23.038008) is located just 13 km east of Grundarfjördur and after 10 km the loop rejoins #54 at its east end (64.96594, -22.89826). Besides that, there is an additional unsigned access road from #54 right between both ends starting at 64.96490, -22.97181.

The vast lava fields of Berserkjahraun ranks high among the most scenic places in Iceland, at least in our opinion. It is a mesmerizing mix of contrasting colors: black sharp-edged lava pillars and nubby boulders partly covered with vibrant green moss surrounded by bright red craters. The flows are 3.600-4.000 years old and originate from a small row of differently sized scoria cones. Raudakúla, the crater in the back on this month's image, is situated east of road #52. The one with the rainbow is named Gráakúla and more to the west there are Smáhraunakúla and Kothraunskúla. Each of them providing a very unique background to the images.

Best time to visit? We recommend visiting Berserkjahraun in mid/late September. With autumn colors at their peak all the small shrubs and berries bushes turn yellow, orange and red. At this time of the year quite a lot of little colorful splotches dot the year-round green moss offering endless opportunities for photography. And there is also a slight change that an early season winter storm blankets the mountain ranges, and that scattered snow and sleet showers add some drama to your images. We made several trips there during our stay at Snaefellsnes and had quite a few everlasting rainbows. Truly out-of-this-world! Iceland at its best!

According to an old legend, part of the Icelandic Eyrbyggia Saga, the road though the "Mad Man's Lava Field" (that's how "Berserkjahraun" translates) was built by two massive Swedish workers in the late 10th century. A local farmer was willing to give one of them the permission to marry his beautiful daughter in exchange of an apparently impossible task. He asked them to clear the path through the lava field in front of his homestead. The Swedish berserkers, both known for their strength and aggressiveness, managed to forge a bridle path through it. But the farmer did not keep his promise. He lured them into a trap and killed both men in an underground scorching sauna. The lava field stretches down to the sea near Berserkjagata (along route #577). That's where you can still see the "original path" and also the burial mound where the skeletons of two large men were found during modern time's excavations (the berserks?). Quite a bedtime story... But even some of the strangely-shaped lava formations resembling monsters or other peculiar creatures can give you the creeps.
While driving along route #558 do not stop your vehicle off the road on the soft and sensitive moss. It's illegal since it takes decades to recover. And be sure that the Huldúfolk will be watching you! ;-)