Boot Arch at the Alabama Hills 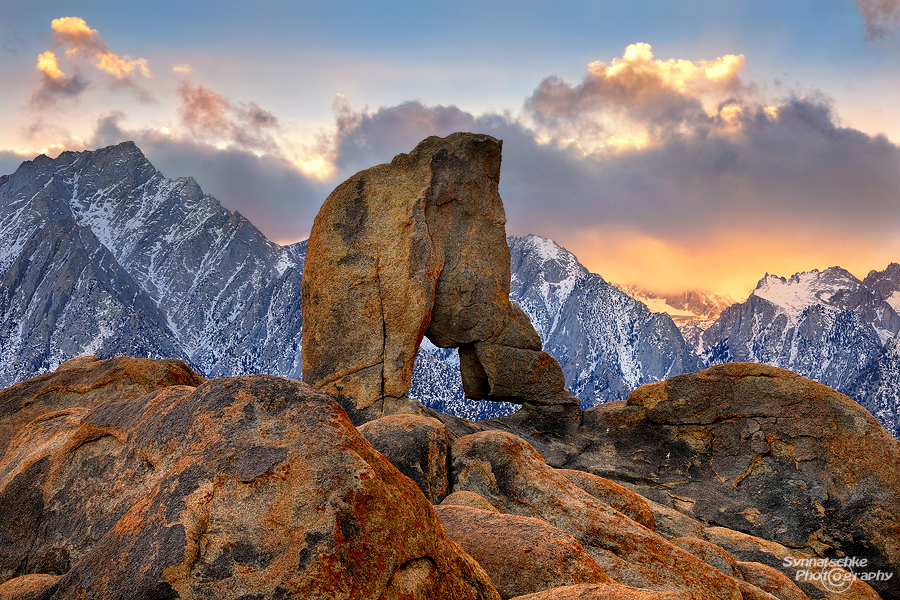 Steffen and I spent our holidays in the American Southwest. This image was taken on Christmas Eve in the Alabama Hills. It shows Boot Arch (note the little "shoe" in the opening of the arch!) in front of the snow-covered Sierra Nevada. The highest peak in California, Mount Whitney (4.421 m, 14.505 ft), is hidden behind the dramatic clouds just right next to Boot Arch. The mountain to the left is called Lone Peak and it also rises up to 3.947 m (12.949 ft). The Alabama Hills are an incredible "playground" for photographers with uncountable arches and scenic vistas. And wintertime is definitely the best season out there!

During our trip we also visited Mono Lake (finally with snow-covered Sierra Nevada in the background!), Death Valley (the salt crusts at Badwater turned white again!), Lake Mead (lovely dramatic "bad weather" clouds and colorful wet badlands near Bowl of Fire), Phoenix (snow-covered mountains and saguaros!) and Tucson (missing the unusual snowfall at Saguaro East National Park for just a couple of hours...). One of the highlights besides the Alabama Hills was Sedona. One of my long time dreams came true there on December 31st, 2018. It started to snow, causing a lot of chaos (all major roads closed due to several accidents), but covering one of the most beautiful Red Rocks in the US Southwest and all those cactus and yuccas with "white sugar" - what a sight! An unforgettable New Year's Eve and New Year's Day! Stay tuned, more images from the US Southwest coming up in February!