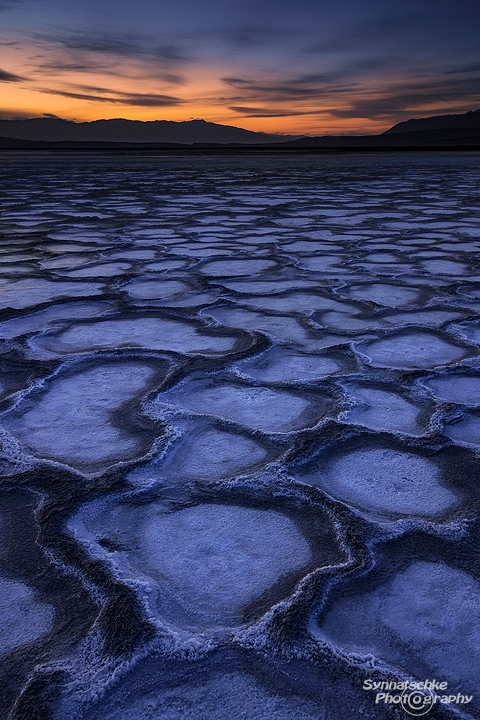 Last year in early January, we stayed a few days at Death Valley National Park in California. Besides shooting cracked mud patterns at dawn, the Mesquite Sand Dunes shortly after sunrise and a few slot canyons, we spent quite a lot of time exploring the salt flats. The bright white salt polygons at Badwater are the most popular, since they are easy to reach. All you have to do is leave your car at the parking lot along #178 and keep following the usually clearly visible trail leading towards the middle of the valley for about 15-20 minutes. But in January they were all deformed and covered with dust/mud (not photogenic at all!). The salt patterns on West Side Road (leaving CA-178 just west of Artists Drive) weren't as ugly-looking, but those patches were rather small, so instead of remaining at the southern part of the valley, we decided to take a look at the vast salt flat expanses north of Furnace Creek Ranch.

Up to then, we just had seen a couple of images from there and were eager to explore Cottonball Basin on our own. As far as we could figure out from satellite images, the targeted area was quite large in size, at least 3 x 1,2 km² (2 x 0,75 square miles).  It took us three days to see most of the basin, find our compositions and to return to these spots for shooting sunrise or sunset.

Salt structures come in all sizes and shapes out there and they change continuously on this frequently wet surface (due to nearby Salt Creek). Some of the patterns we found reminded us of Badwater, others looked like someone had been laying white tiles all over the place or spraying white dots on the ground. And there were also large areas, where the white salt "pools" surrounded by brown thick borders stretched out to the horizon (just as on this image) or on the one displayed above. Those were our favorite areas at Cottonball Basin last January and this year.

We parked our car approx. 9,5 km (~6 mi) north of Furnace Creek Ranch right beside CA-190 and hiked west for about 1 km (0,6 mi). But things change quickly at Cottonball Basin, so you never know what to expect and GPS waypoints don't make any sense in a many-faceted place like that. The heavy El Niño rains during winter season 2015-16, that damaged several roads as well as Scotty's Castle and which made Lake Manly reappear for a short time, also changed again every single part of these salt flats.

So bring plenty of time for scouting and photography. You won't regret, the place is full of surprises!
Avoid stepping on the wet surfaces and make sure it hadn't rained recently, otherwise you will destroy all those beautiful patterns by leaving deep footprints all over the basin.