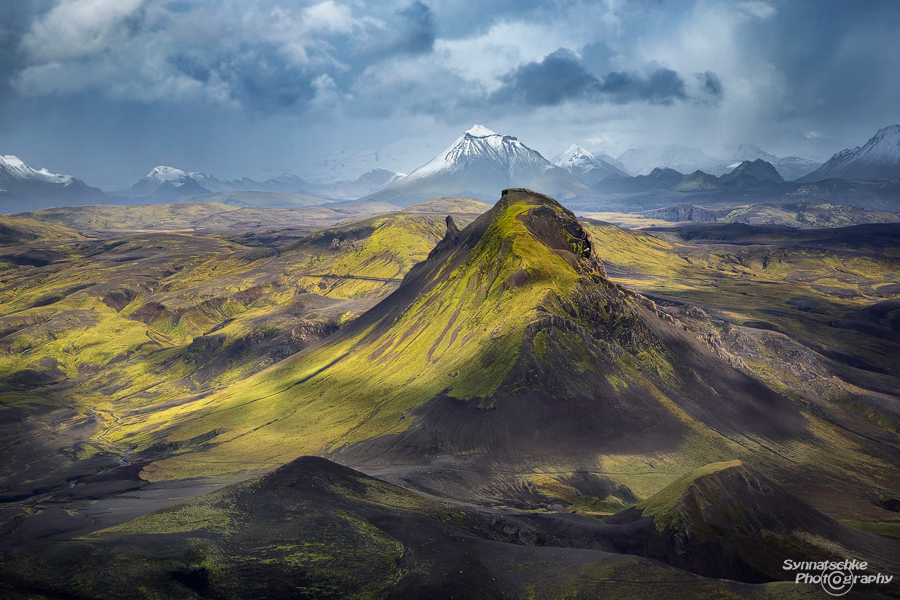 Aerial View of Einhyrningur in the Icelandic Highlands

We've made major changes to our "Best of Iceland" gallery and that's why we chose one of the most fascinating mountains in the Icelandic Highlands as "image of the month". Einhyrningur is just 651 m in heights, but due to its peculiar shape this extinct volcano really stands out. It features a rock outcrop resembling a horn, so it is easy to see why it was called that way ("Einhyrningur" is Icelandic for "Unicorn"). This mountain is the most prominent landmark along Emstruleid mountain road (F261) besides Hattafell - that's the one with the snow-capped peak behind it and with 910 m in elevation.

We took this image during a scenic flight back in 2013. It was truly a magic sight, the first snow (mid September!) and some dramatic weather conditions. A little bit dangerous and it was quite a bumpy flight with the Cessna, but we enjoyed every single moment of it! The fall colors surrounding the rivers and the white mountains at Langisjor were absolutely breathtaking and so was the light e.g. at Ljotipollur (we will never understand why this caldera is called the "ugly pool"! ;-) ).

Besides updating the "Best of", we added quite a lot of images from 2017-2019 to our Iceland galleries recently (> 100 pictures!). Since there were way too many images in the "Landscapes" album, we made a brandnew subalbum: "Highlands" covering not just Fjallabak Nature Preserve, but also other spots located in the interior of Iceland. Since those are some of our favorite landscapes on Earth, it was really hard work, just picking out a few from there for our "Best of Iceland". We hope you can see why. So please don't forget to check out the other albums as well. ;-)