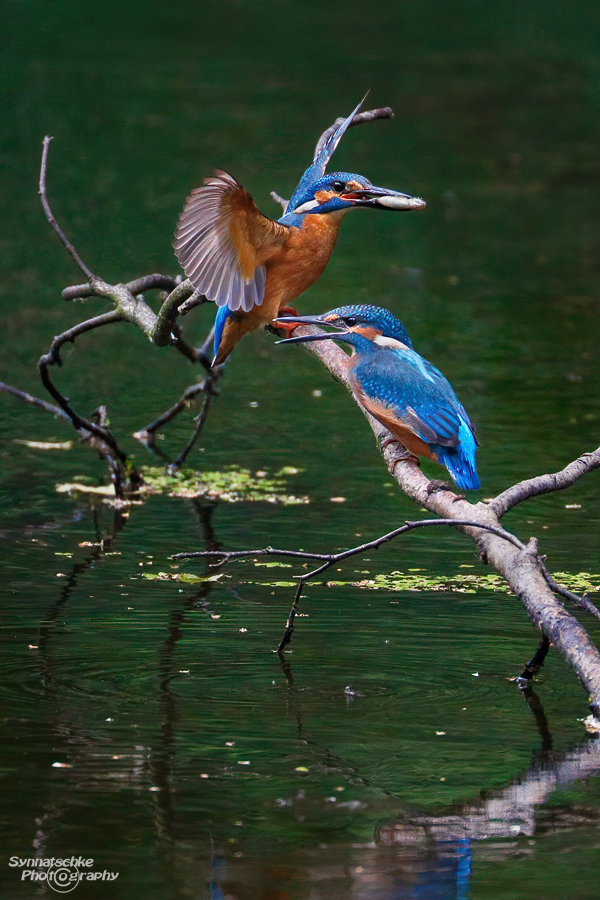 We have been doing quite a lot of birding lately - observing the behaviour of large birds of prey such as eagles, ospreys and red kites, and admiring also a couple of smaller ones. Steffen is especially fond of Eurasian kingfishers (Alcedo atthis), also known as "common kingfishers". These tiny little, brilliantly colored birds are only up to 16 cm (6.3 inches) long and weigh about 35 grams (1.2 ounces). A few weeks ago we found a happy couple living at a pond near our home. There they had dug a long tunnel and a chamber into a sandy, stone-free slope of a small island. Until recently they had been always pretty busy feeding their second offspring. Some Eurasian kingfishers breed up to 3 times a year!

The males and females are easy to tell apart, since the lower part of her beak is orange/red, while his is entirely black. Each time the male has caught a fish (sometimes an amazingly big fish!), he sat down on his favorite perch in front of the nesting burrow. For a few moments he rested there and looked around checking if the "coast was clear". Barely a minute later, after feeding the chicks, the kingfisher took a short bath, returned to the perch, then another bath. After that he usually went back fishing and "dive-bombing" on the other side of the island. Sometimes he also moved to another branch nearby and started thoroughly cleaning his azure-blue wing feathers. It was so beautiful to watch!
He got somehow habituated to human presence and hardly cared about us anymore, at least when we were hidden behind trees and bushes. Once he even started digging a new nesting burrow while we were there.

The female kingfisher was not that easy to spot and rarely rested on his favorite perch. She was way more shy than her "husband" and acted totally different. When she approached the nesting habitat, she always remained silent. He usually called and whistled a lot... typical male? ;-)
So no wonder he also posed for us with one of his youngsters. The little birds fledged this week and left us all excited! :-)
That's why this month's image must be dedicated to them. It shows the male Eurasian kingfisher teaching one of his "kids" how to catch a fish. Note the difference in the color of their feet: Only grown-ups have orange/reddish feet (it's the one in the back!).

Btw Eurasian kingfishers strictly follow the current rules of social distancing. The male do not tolerate any other rival or kingfisher couple nearby. Even their chicks are chased away as soon as they became professional fishermen. This will probably happen within a couple of days. Then these little guys will be ready to start a life on their own - just 7 weeks after their mother laid the eggs! Isn't life amazing?