Evening light on the Ibex Dunes at Death Valley 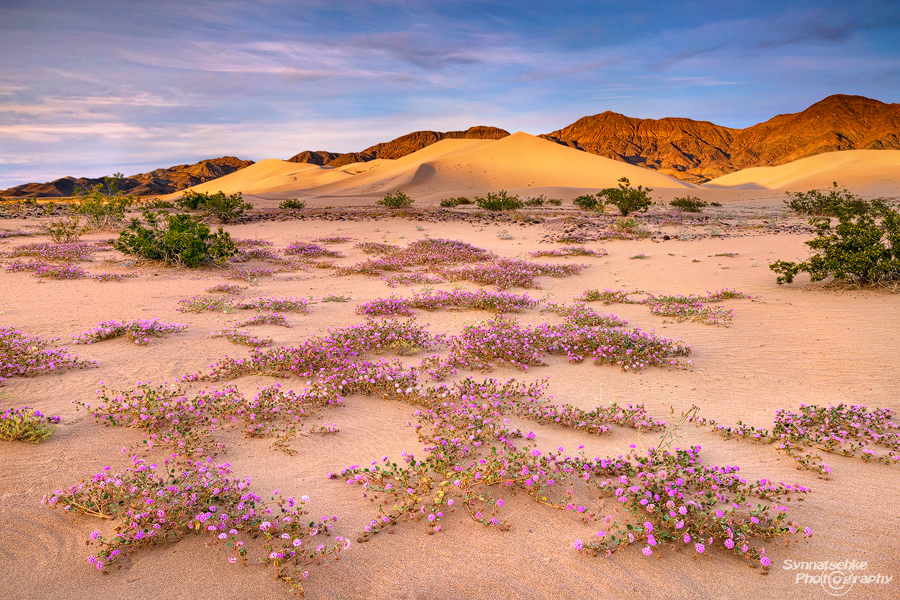 Death Valley National Park experienced a tremendous amount of rain last October due to extreme weather conditions and the prevailing El Niño. Scotty's Castle is still damaged and two major roads are closed since then: Hwy 178 over Jubilee Pass to Shoshone as well as the direct connection from Ubehebe Crater to Hwy 95/Beatty.

All that water led to an once-in-a-decade event. By late January Death Valley, the hottest and most barren place in North America, came alive. Thick carpets of desert gold (geraea canescens) covered the main valley for miles and miles, especially the area around Badwater. The peak of the "super bloom 2016" took place in February, but the flower fields were still looking pretty spectacular when we arrived there in March. Millions of blossoms blanketed the dry soils and colorful flowers emerged from the most craziest places - sometimes just right beside the roads, inside narrow canyons or even on playas from within deep cracks in the dried mud. Desert five-spots (eremalche rotundifolia), gravel ghosts (atrichoseris platyphylla), golden evening primroses (camissonia brevipes), rock daisies (perityle emoryi) and notch-leaf phacelia (pachelia crenulata) - just to name a few.

We also found the foothills of the Ibex Dunes adorned with purple desert sand verbena (abronia villosa) along with a couple of brown-eyed evening primroses (camissonia claviformis). Access to this place is not as easy and quick as to the popular Mesquite Sand Dunes since they are located way off the main valley. It's a 1,5-mile-hike from unpaved Saratoga Springs Road, west of Hwy 127 in the southeastern portion of Death Valley National Park. The Ibex Dunes offer the kind of remoteness we enjoy so much in the deserts across the Southern US. The few other visitors were hardly noticed and there were almost no footprints at the most beautiful spots.

We were just surrounded by bees that evening. And the smell of the verbena - especially after sunset - was incredible! I really wish an image could also transmit that fantastic sweet fragrance to its viewers!

Related Links: More images from the Death Valley and whenever you visit the deserts in the US Southwest in early spring check out this wonderful page for wildflower updates -> desertusa.com.