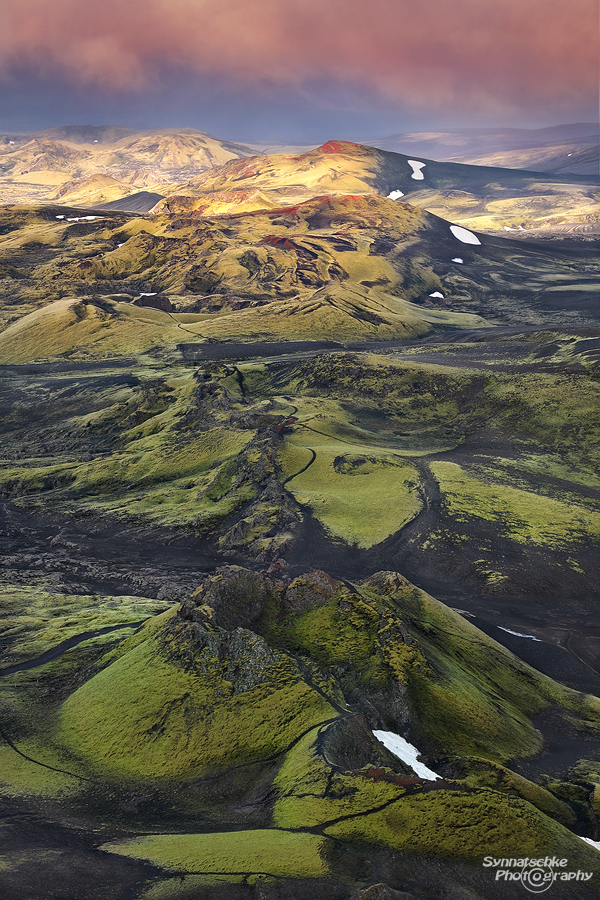 Lakagigar is one of the most fascinating places in the Icelandic Highlands. Mount Laki rises about 200 m above its immediate surroundings. From its top the view extends far east and far west providing a bird eye's perspective of the crater row that once changed the weather patterns on Earth dramatically. The eruption which lasted from June 1783 until February 1784 was one of the worst natural disasters in historical times. Volcanic gases and ashes spreading all over Europe and Asia obscured the sun, leading to a so-called volcanic winter and to a terrible famine. But also the American continent was affected, by that time even the Mississippi River in the United States froze and icebergs were swimming at the Gulf of Mexico.

Lakagigar is one of those places in Iceland that leave visitors in awe. Vegetation is slowly coming back covering the black lava hills with soft and lush green moss. A sight beyond words! We have been there quite a few times by now, but always had bad weather luck. This time the Icelandic weather was not less terrible, but at least the forecast said that there might be a chance for a great sunset. So we ventured out there - 50 km one-way of dirt road (F206) and a couple of river fords to cross; about 2 hours travel time.

Since there was nothing but fog at sunset, we decided to wait until sunrise (both are just 3 hours apart on July 1st!). So we waited in our car for the fog to disappear... At 3 o'clock in the morning (official sunrise time!) it seemed as if the skies might finally clear up a little bit, so we packed our gear and climbed up the steep slope. And there we sat on top of Mount Laki wearing gloves and woolen caps in the middle of the summer, enduring icy wind gusts and once again "waiting for the light"...

Nothing happened for almost two hours, it seemed like forever under these circumstances... When we were about to give up, already on our way back to the car, a sudden golden beam appeared out of nowhere just north of the mountain - probably the most unexpected and magic light we've ever witnessed in our whole life. Way too crazy to be properly caught with a camera, way too crazy to be described with the right words - every now and then the golden fog patches dissipated a little bit, revealing parts of the surreal volcanic plains glowing like mad in all kinds of neon green hues. And to the west the red cinder on top of some of the craters in the distance were literally on fire. The light show at Lakagigar lasted but half an hour or so (then the fog spread out again), but it definitely provided us with one of the most magic moments during our this year's summer trip to Iceland.