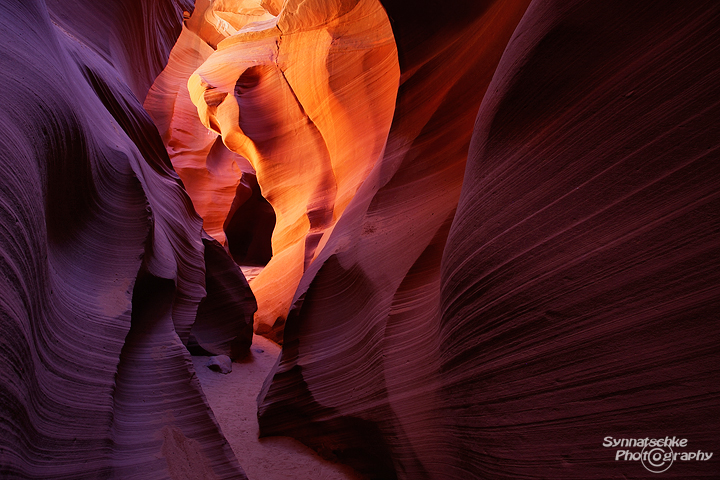 Missing the good old days! Dramatic changes took place at Lower Antelope Canyon on Navajo Indian Reservation, at least for photographers... No photography tours are offered anymore, all tripods were banned (until further notice... -> forever?). Only monopods can be used, but they aren't really an option for most photographers. Shooting inside this dark slot usually require a shutter speed of 2 seconds or way more. Unless you want to change the ISO settings - but who really wants to do this?

Having said that, we are not sure if we will ever return to this location. Probably not... And that makes us kind of sad, since Lower Antelope Canyon is definitely one of the most beautiful slot canyons in the American Southwest - if not even "on Earth"! ;-)
We could spend days inside those narrow walls without getting bored! Those softly polished canyon walls offer endless photo ops and they constantly change while the sun moves across the sky and lightens up different parts of the canyon.

This month's image shows one of our personal favorite formations inside Lower Antelope Canyon. It was taken back in fall 2010 during our last visit. Not sure about the official designation, but since it so much resembles a rabbit's face (nose and eyes) we simply named it "the rabbit". For most of the day it isn't a real eyecatcher, but for a couple of minutes the rabbit's head starts to glow like mad. And the colors - for a very short time - look like "Photoshop-craziness", but they aren't. That's the scenery caught on the sensor and straight out of the cam.