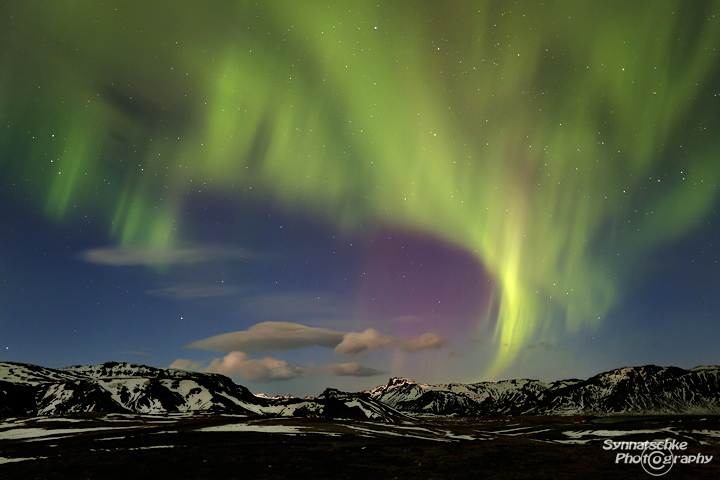 Sunspot activity undergoes an 11-year cycle and is currently still at its most intense. So this March we returned to Iceland and hoped for some great northern light displays. Watching the "Aurora Borealis" and those green, yellow and sometimes even pink, white or blue lights dancing across the skies all night long might be one of those unforgettable once in a lifetime experiences. But you have to be lucky. There must be some geomagnetic activity going on in our atmosphere and the clouds should not block the view. So being as spontaneous as possible and always following the cloud forecast on vedur.is helps a lot in setting up your tripod on the right place at the right time. This forecast is usually pretty accurate (even several days in advance!), but when there is no major geomagnetic storm better do not rely on their aurora prediction.

Two weeks ago we had two nights full of "madness in the sky" and on both nights there was supposed to be no visible aurora in Iceland. The Kp index, the global geomagnetic storm indicator, was shown to be equal to zero. And just like last year even the current Kp index did not match...! Only the Aurora App on our Smartphone warned us and indicated an active aurora (Kp=4) or even a high auroral activity with a Kp=5! And this happened to us twice this year and once last year. So in order not to miss any show we utterly recommend watching the skies from time to time, having an Aurora App on your Smartphone with the notification strength settings at Kp≥2 and also following the "Aurora Service Europe" and "Aurora Alerts" on Facebook. You can choose "get notifications" on their site and we found their FB-warnings for Kp≥3 pretty good, at least way better than any kind of aurora forecast on the official Icelandic website. And strangely the renown Ovation Aurora did not perform well either.

These are the aurora forecasts we like to check on a regular basis while in Iceland (and also before going on a tour):

Now in April, the nights are getting shorter and shorter and in northern Iceland there will be already less than 4 hours of complete darkness by the end of this month. So unfortunately the aurora season is almost over, but we hope that the sunspot activity remains at its peak and that there will be still quite a lot of geomagnetic storms going on next winter. We are looking forward to our next trip and we also wish you the best of luck when going on an "aurora hunt"! And please stay tuned, since more northern lights pictures will be coming up soon, as well as a lot of new winter images of Iceland!