Scroll
Season's Greetings!
Oh my God(afoss) - What a sunset! 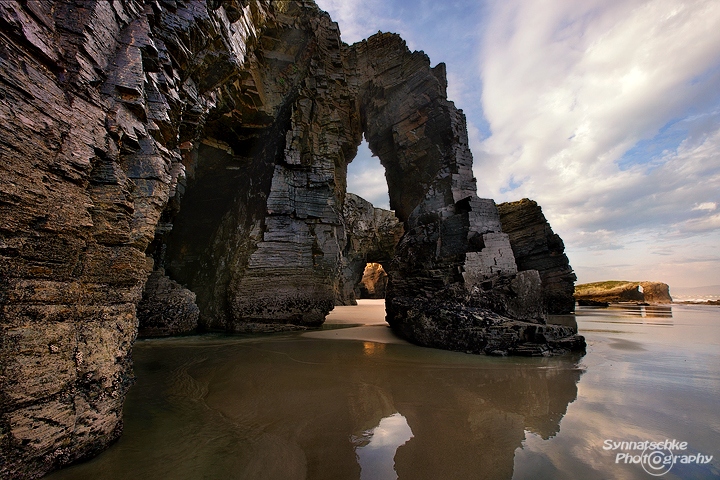 This month's image was taken in Northern Spain at the Playa de las Catedrales (in Galician: "Praia das Catedrais"), one of the most spectacular beaches we have ever been - unfortunately not nearly as secluded and lonesome as those on the Olympic Peninsula in the Pacific Northwest, but nevertheless extremely impressive. Over time, the Atlantic Ocean has carved the ~30 m high dark cliffs into a labyrinth of caves, alcoves and arches. The most beautiful part of the Playa de las Catedrales, a row of arches, can only be accessed at very low tide. Usually the beach is heavily visited (mostly Spanish people!), but if you happen to be there at sunrise during low season, you might be lucky and even have the whole beach for yourself. We truly enjoyed it!

But in accordance with the old German adage "Alle guten Sachen sind drei" (which roughly translates to "good things always come in threes") it took us three attempts until we finally had nice conditions at the Playa de las Catedrales. On our first visit in Spring 2015, the low tide was not low enough. Even at -0,9 m there was a large pool blocking the access (~ 1 m deep) and too much water right under the row of arches. Since the ocean was completely calm that day, we went there anyway along with some other crazy people, just out of curiosity and to do some scouting.

During our second visit the tide was more than perfect. And we noticed that this beach isn't just all about tides. If you're able to walk up to the row of arches or not, also depends on how much sand was deposited along the coastline. The large pool simply didn't exist anymore, even at -0,9 m the access was easy. With a little bit of caution and waiting for the waves to recede, you didn't even have to get your feet wet! But we had a new issue: Due to the fog there was no sunrise all day long, and worse than that: It was so dense that you could hardly see the next couple of arches! So again, we came back from the Playa de las Catedrales without any (acceptable) images - with exception of the incredibly colorful caves which are always beautiful and worth shooting during low tide.

But since we spent 10 days in Northern Spain now in late October/early November, we returned there a couple of days later. The tide was still OK (thanks to the new sandbar!), the fog was finally gone by then and what's even more important: There were no crowds at all until 10:30 AM, when we decided to leave and have a wonderful brunch - a "café con leche" (tastes like the Cappuccino in Germany or in the US) as appetizer and then some Gambas al ajillo with a glass of (tasty) Spanish red wine. Cheers! ;-)

We enjoyed a couple of more sunsets and sunrises during our short vacation. The rugged coastlines in Northern Spain keep fascinating us and we hope to be back soon again.
For now, I need to finish working on another travel guide book and we also still have to review & upload tons of pictures from Iceland (September) and the US Southwest (February/March). And of course there will quite a lot of new images from Spain coming up during the next months as well. And if you are interested, there are some more snapshots in our blog in German language about the Playa de las Catedrales.

PS: If you ever go to Northern Spain, make sure to bring a (good) dictionary along and to learn a couple of words in Spanish. Nobody speaks English in Northern Spain, not a single word. And really NOBODY besides the lady at the car rental company and the one at the reception in the Airport Hotel at Bilbao!