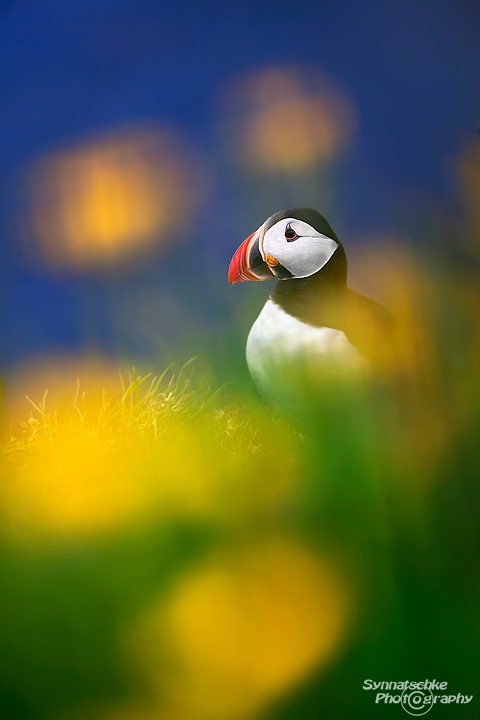 The Atlantic Puffin nesting colonies are a not-to-be-missed sight along the coastline while on a summer trip in Iceland. It is such a joy watching them sitting on top of the steep cliffs, flying or walking around and cuddling each other! These cute and funny-looking, little birds usually spend the autumn and wintertime out in the North Atlantic Ocean and return to their favorite breeding places in early April. All (life-long) puffin couples will have finished building their nests and laying their eggs by late April. And by the end of this month (May) the first adult birds returning from the sea with a beak-load of fish announce the successfully hatching of their chick.

This month's image shows an Atlantic Puffin (Fratercula arctica) sitting at the edge of a cliff at Bakkagerdi in the Eastfjords, framed by a couple of yellow flowers. It was taken last summer after a very short night at 4 AM in the morning when it stopped raining for just about an hour.

The bird rock Hafnarhólmi island right at the harbour near the small town of Bakkagerdi in Borgarfjördur eystri is one of the best places to see and photograph puffins in Iceland, along with:

Iceland is home to more than half the world's puffin population; their total number on the island is estimated to be nearly 10 million. However, in recent years global warming might be leading to a mismatch between these little birds and their food resources. Warmer seas feature less smaller fishes for their offspring and puffin chicks die of hunger - unfortunately also in Iceland. The Atlantic Puffin is not yet considered endangered, nevertheless their population is on a decline in many places and their feeding job is getting tougher and tougher. So when you visit a nesting colony please be respectful. And keep in mind that if a puffin sitting at the edge of a cliff with a "fully-loaded" beak starts making strange noises, you might be disturbing him badly and blocking its way to the nest entrance.