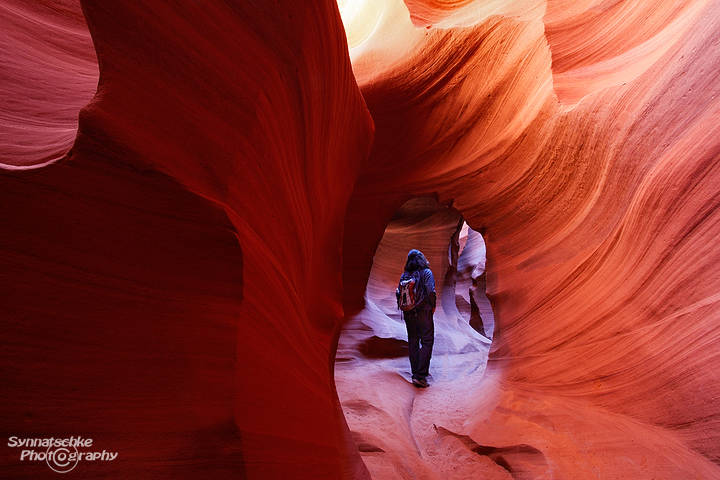 This month's image shows one of the beautiful arches inside Lower Antelope Canyon at Navajo Indian Reservation near Page, Arizona. It is usually done by photographers from its front side, but somehow I liked it from the other side even more. The strong indirect lighting set the canyon on fire, and even the shape of the glowing sandstone walls reminded me of "flames".

I thought it might be a good idea doing also a size comparison there. And that's when I started sprinting back and forth until I found myself in the right place at the right time (when the 10 s self-timer fired...). It's a kind of "selfie", I took back in 2010. In the meanwhile the Navajos changed their access regulations. Since early 2015 they do not issue "Photo Passes" anymore, everyone is obliged to join a guided tour now - either the 2-hour Photography Tour (with tripods) or the regular 1-hour tour (where you are not allowed to take tripods or monopods with you).

They say its due to vandalized canyon walls (and maybe also because the number of visitors from all over the world has been exploding during the last couple of years...). So unfortunately no one is allowed to stay on their own inside the canyon anymore. Those good old times are gone, when photographers were able to move around freely and when everyone could chose your photography subjects all on your own inside Lower Antelope Canyon. So glad we were able to spend several hours inside the canyon back in 2008 and 2010!