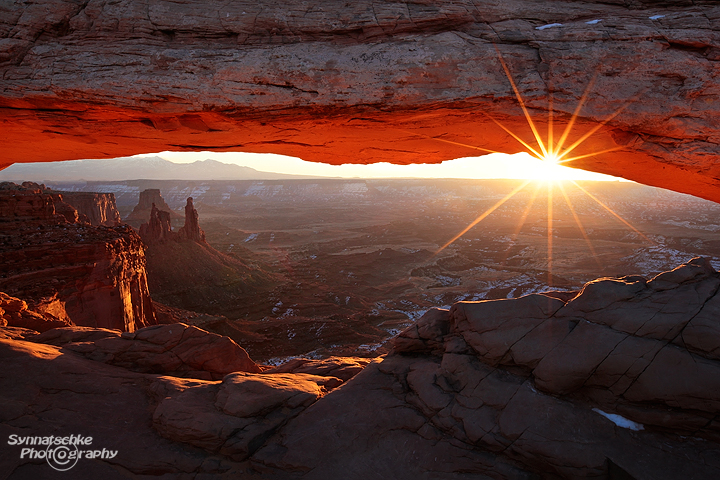 This month's image shows a classic shot of Mesa Arch at sunrise taken in early January 2014. No wonder most pictures of this 90 ft (27 m) wide arch perched on the edge of a cliff and framing the deep canyons of Colorado River and the La Sal Mountains do look pretty much the same. There is almost no place for creativity here, not least because usually there is not much space: A single row of 10-12 photographers and their tripods huddling close to each other, that's it! (see image)

The most striking difference you might notice on all those innumerous pictures taken here is the sun. It is supposed to rise in the east, but in fact when standing in front of the arch it will show up way more to your right in early winter and even disappear to the left in late spring/early summer. If you prefer capturing the scene with the sun rising just behind the pinnacles (Washer Woman and Monster Tower), then you should consider visiting Canyonlands National Park in April or late August. Usually there is not much moisture in the air by then, but if it happens you will be rewarded with some fantastic beams hitting those pretty formations.

And there is not much you could do wrong at Mesa Arch, unless you arrive too late. Luckily, sunrise in winter is not as early as in spring or summer, so this time we didn't have to wake up in the middle of the night to be at Mesa Arch on time, which in this specific case doesn't mean "before the sun breaks over the horizon". It rather means you have to "beat the crowd". Expect all really good places by the arch be taken at least one hour before sunrise. Even low season or weekdays don't matter much here!
It's an hour's drive from Moab and a short 400-yards-walk to get to Mesa Arch. So better not be a sleepyhead when staying in Moab! ;-)