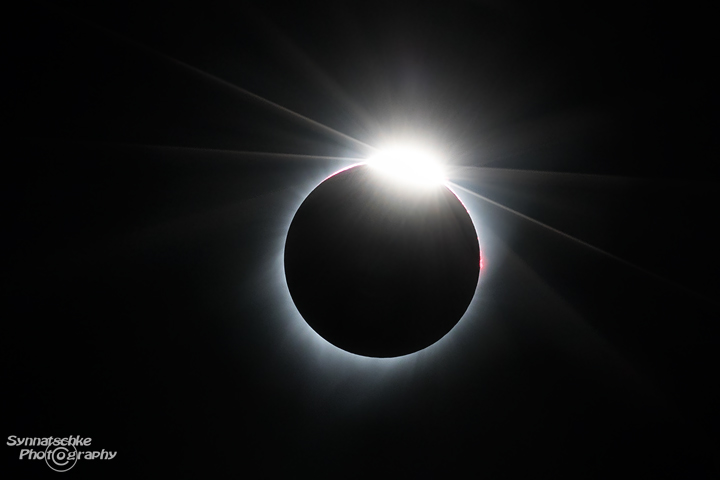 THE DIAMOND RING - during the TOTAL SOLAR ECLIPSE in August 2017

Steffen and I just returned from another trip to North America. Usually we avoid traveling to the United States during the hot and busy sommer months, but this August there was a very special event we didn't want to miss: a total solar eclipse crossing the entire country from coast to coast. It was our first total solar eclipse and we really enjoyed it - standing on a high mountain summit with a 360°-panorama and far far away from the crowds! :-)

We started making plans quite early and we booked our cabin near Old Faithful Geyser in May 2016 as well as the majority of the hotels (including the night before the eclipse) on August 1st, 2016 right at 12:00 AM (midnight). I was glad to get a room at the Stafford Inn at Prineville for less than 200 USD, but my happiness didn't last long. A couple of days later I received a message from booking.com telling me that "the hotel is closing, so that they had to cancel our reservation".

Well... needless to say, that the hotel did not close... They most probably just forgot to raise their rates... Also needless to say, that all the other good alternatives were gone by then. There were just a few rooms left with truly lunatic rates - a simple Rodeway Inn charging almost $2.000 for that night or a bed in a youth hotel dormitory for nearly $1.000 etc. And since NASA kept promoting the area around Madras/Bend, we skipped the idea of spending those precious 2 minutes at the nearby (probably also supercrowded) Painted Hills. So I started looking for other options by using Google Earth and studying topographic maps. I had envisioned a high mountain with a 360°-panorama, that would be easy to reach and that was pretty unknown. To my surprise I found such a place right next to the Interstate connecting Boise/ID and Baker City/OR. The name sounded so promising: BIG LOOKOUT MOUNTAIN, the 17th "most topographically prominent summit" in Oregon (7.120 ft/2.170 m). And Google showed me almost no results at all for that peak! How could it be!??

Due to the close proximity to the I-84 and after seeing the madness that was already going on at Jackson Hole one week ahead of the event, we started to get a little bit nervous about the crowds. We had a plan B of course in the totality zone, but we really wanted to get high up on a mountain top. It was only a small and winding forest road leading there, so we started early on Sunday (the day before the eclipse) and were surprised by finding the U.S. Army blocking the access. They really did a great job there and kept quite a few people out of the area by telling everybody how terribly bad the dirt road was (it was not bad at all ;-) ...) and how risky this trip would be due to the extreme fire danger. Especially because we could ignite a wildfire on that mountain just by traveling there with our car. They were really good in keeping people out of that place and it almost made us feel scared too!

When we arrived at the trailhead to the "Big Lookout Mountain" there was almost nobody there - we couldn't hardly believe it! Another couple from CA arrived already on Wednesday, also afraid of the crowds. And even the National Forest crew was really surprised by counting only ~35 campers. This place was obviously a well-kept local secret indeed (and protected safely by the Army ;-) ...).

We felt so incredibly lucky! Also because of the weather: No clouds at all and no wildfire haze at this place the next morning. It was a short only 45-min-climb up to the peak from our campsite (we slept in our car that night in sleeping bags we bought for almost no money at Walmart). A couple of people more arrived that morning to watch the total solar eclipse, but we were still just a few on top of that mountain. Wow!

And there we stood waiting for the dark shadow to cross the plains facing west and briefly turning day into night. It was such an eerie feeling, when it started getting dimmer and dimmer. We even put on a jacket since it got pretty cold. And all suddenly, there it was, the 360°-sunset we were looking for, and all those stars sparkling in the sky in the middle of the morning. And since Steffen and I were so high up, we could even see some mountains in the distance which were still hit by the "setting" sun. And the corona looked so incredible, I just forgot everything around me...

Our main purpose was to "experience" the total solar eclipse. So the image shown here is rather a "snapshot" than serious photography, nevertheless we really like it how it turned out. Steffen caught the most impressive part of the whole eclipse, the so-called "third contact", the moment when the sun reappeared after roughly 2 minutes of darkness. It felt so surreal, just like if there was someone pointing a soft spotlight at you from above after sunset. Incredibly weird! It's named the "diamond ring" effect in astronomy and that is exactly how it looks like. We also saw some "solar prominences" during totality and even on this image there is one red solar flare, if you look closely at the right hand side of the sun.

The rest of the eclipse was less memorable... We had quite a few major congestions, closed interstates, annoying detours and on the next day we felt lucky to have a reservation for the ferry to Vancouver Island. The eclipse watchers were also causing some chaos over there, and quite a few people were not able to cross the Strait of San Juan de Fuca that day...
Prior to the solar eclipse we also visited the Rocky Mountains in Canada as well as Yellowstone and Waterton/Glacier National Park. So more images will be coming up soon... Stay tuned! :-)