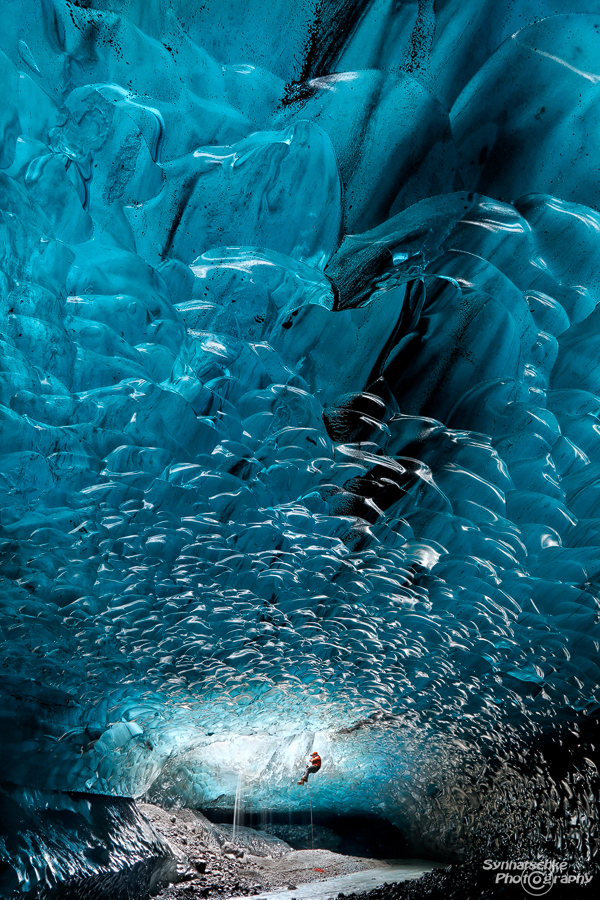 This year's ice cave tour came as a surprise and was definitely one of the highlights of our autumn trip to Iceland. We were not aware at all that the ice cave season had already started. The licensed tour companies at Vatnajökull National Park began offering trips by early September!
If it wasn't for the very pleasant and talkative waiter at the Hali Country Hotel we would have missed the opportunity. He told us about it while we were having breakfast, so soon after we finished coffee we spontaneously joined the tour. Given the heavy rains on the preceding day (September 29th), it had to be postponed to 1 PM. By then the glacier and the cave were again safe enough for visitation. I called a friend who was doing some hiking nearby and he hurried back to his car at the trailhead to join us just in time. And there were two more persons waiting for the tour (from our hometown, what a crazy coincidence!!!). So we were only 5 people! Normally you need to make a reservation well in advance (-> link) and share the ice cave with all the other tour companies. This means that sometimes there are dozens of tourists from all over the world in just one tiny spot. Can't tell you how lucky we felt! And the waiter from Poland got quite a tip from us the next morning! :-)

A large 4WD shuttle bus with sturdy tires took us to the same glacier tongue we had been during our last "Ice Cave Tour". Haukur, our guide, showed us the exact location where we took our images 5 years ago. Back then, this place was covered by one of the most fantastic ice cave ceilings we have ever seen (properly named "Northern Lights Cave", please click on the image below). Now nothing else can be found out there but a stony desert. Breidamerkurjökull, part of the large Vatnajökull, has receded at least 500 m (~550 yards) since then! So we had to walk this additional distance to reach the glacier and its new cave.

Haukur engages a lot in environmental protection and explains what is currently happening to the Icelandic glaciers to his customers. Besides guiding people and offering lessons for students, he also does some other amazing things: There was a small waterfall in the back tumbling through an opening in the cave's ceiling. Haukur asked us if he should rappel down, so we could take some images with a little bit of "action". Oh wow, all of us were thrilled! Such a fabulous idea, such a great guide! He is very enthusiastic about his job and we couldn't have felt better taken care of, especially when compared with the two Icelandic ice cave tours we had previously done with other companies. So we think he and his family-run company "Glacier Adventure" definitely deserve the recommendation as "Best Ice Cave Tour in Iceland"!
We will be back for sure for some more "glacier adventures"! Haukur and his wife are also planning to open a coffee shop right next to the hotel. Looking forward to that as well. :-)

We headed to Jökulsárlón Glacier Lagoon and Hali Country Hotel (also highly recommended!) in Southern Iceland just to see the northern lights (big show due to a G2 solar storm!) and we ended up shooting some rappelling action in an ice cave. Iceland is always so full of surprises!
More images and videos from this ice cave are coming up on our blog soon. And of course we will upload quite a lot of photographs from our AMAZING autumn trip here at our "Iceland Photo Galleries" during the next couple of weeks. Stay tuned! ;-)

Tip: Including a human person always gives a better notion of the size of an ice cave! The images shown below were both taken at the glacier tongue of Breidamerkurjökull, the first one in March 2015 (Northern Lights Cave) and the second one now in September 2020 (Crystal Ice Cave). 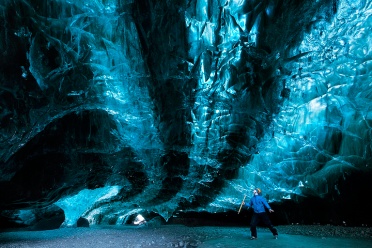 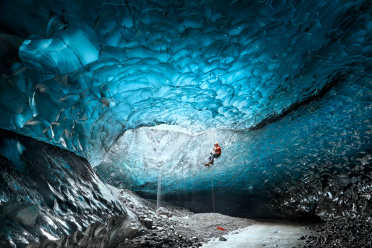