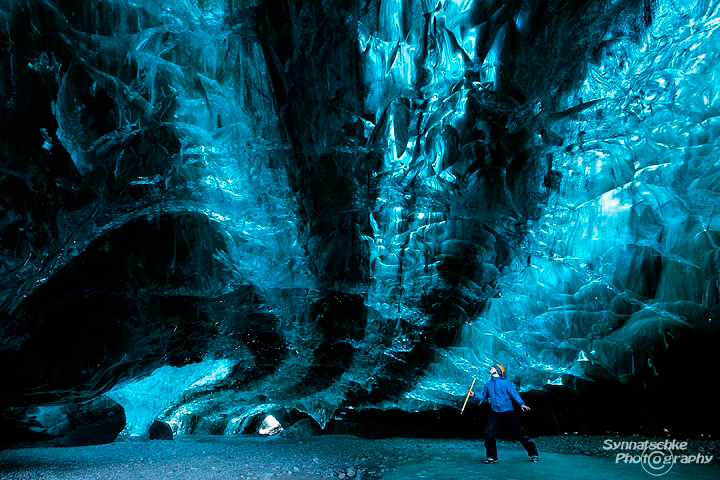 We've been back in Iceland this winter. We enjoyed some sleepless nights with amazing northern lights displays along the south coast (with a Kp-value of "5"; new images will be coming up soon!) and had a lot of great winter sunsets/sunrises, but also some very bad weather and everything that goes along with it: terrible driving conditions, slippery icy roads, sometimes even impassible roads, blizzards & whiteouts, cars pushed off the roads by strong gales etc etc...

And we even saw "northern lights" in an ice cave...! ;-)
During an Ice Cave Tour at Vatnajökull National Park in early March and that's where this month's image is from. It shows fabulous Northern Lights Ice Cave at Breidamerkurjökull, one of the largest glacier tongues on the southern side of Vatnajökull. We've been to three other ice caves there up to now, but none of them was nearly as scenic as this one. The ashes of ancient volcanic activity - maybe even the one from the dreadful Laki Craters eruption in the late 18th century - got mixed up with the old glacial ice and created the most wonderful patterns and stripes on the roof of this cave.

We joined this tour rather spontaneously after another never-ending northern lights night and really enjoyed it. Haukur ("Hawk" is doing a great job as a "model" on this image... ;-)...) and Vésteinn are nice and very friendly guides, so we can highly recommend Glacier Adventures. They start their tours at Hali Country Hotel, which in turn is a good place to stay while doing an ice caving tour or visiting the famous Jökulsárlón Glacier Lagoon and the Iceberg Beach nearby.