Finding the King of Wings 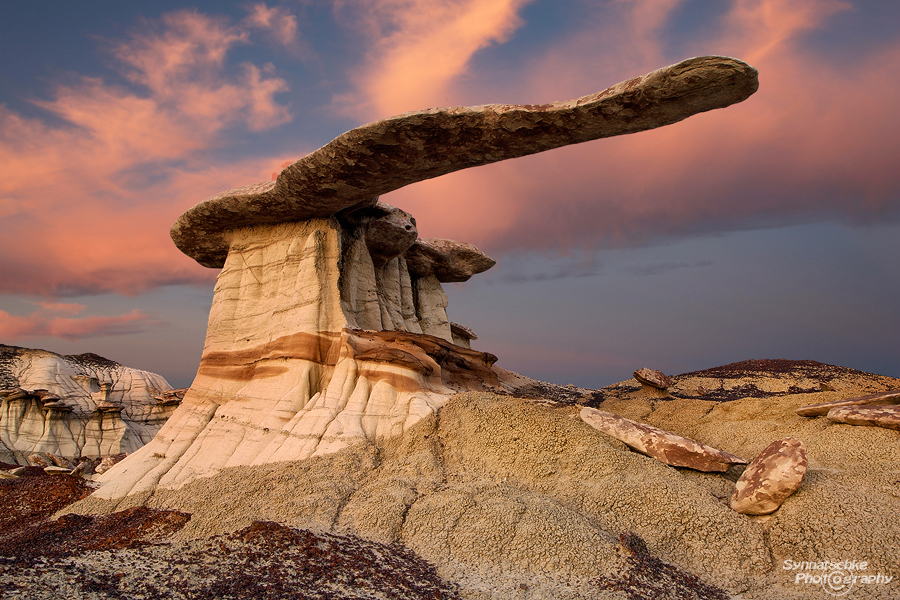 The story about how we found the "King of Wings" in the vast expanses of the San Juan Basin deserts in Northern New Mexico is quite similar to the one from last month's image. There also was a lot of coddiwompling involved while solving this great puzzle. All started when a friend from Colorado showed us an image of an incredible and absolutely unique balanced stone wing on the internet. It was a local explorer (and now famous microbiome scientist! :) ) called Momo who discovered this formation while flying low over the badlands. He was not willing to share the location with anybody - quite understandable given its enormous fragility.

But the shape of the wing looked so insane (in the sense of "defying gravity"), that we couldn't help but start searching for it. For a couple of years now, you can clearly notice the long shadow cast by the overhanging wing on Google satellite images. But back in 2008 satellite images were not really a great help due to their extremely low resolution. So we had no choice but doing a lot of exploratory hikes. By then, we were already familiar with the Bisti Badlands and De-Na-Zin Wilderness (images) and the Ah-Shi-Sle-Pah Wilderness Study Area (detailed information, directions, GPS waypoints etc.) and therefore able to skip parts of it. But the remaining "unknown" area was nonetheless considerable and consisted of pristine badlands practically untrampled by man...

It's usually Steffen who is great in following his instincts and making some "educated" or "lucky guesses". And after that it's usually me spotting the places while out there in the field or at least some small hints like the right peaks in mountain ranges, revealing desert varnish patterns on canyon walls, etc. And that's exactly what happened here again: Steffen had the idea to check out some badlands north of the Ah-Shi-Sle-Pah wash (already outside the wilderness area) and we parked the car somewhere in the middle of nowhere and wandered around for a while. Suddenly Steffen pointed to a place further down the wash. Usually I wouldn't have raised my head while going down a slope, but I did and I also looked to the right. And there it was in the distance, framed by two ocher-colored bentonite hills... Just one moment later it would have disappeared behind the badlands and - who knows - maybe we wouldn't have found it. We were endlessly excited! This happened on our third attempt, on our third hike "into the unknown" in the San Juan Basin - we could hardly believe our luck!

And what a sight it was! Erosional forces can create the most marvelous things, it's unbelievable how this formation defied gravitation for such a long time (here is a size comparison). The Bisti Wilderness Area features quite a lot of stone wings, but none of them is nearly as crazy as this one. Steffen instantly came up with the perfect nickname: "King of wings"!
Back home we contacted Momo and left him a little bit speechless. It was a given that we wouldn't publish anything about its location. But the years passed, satellite images improved significantly and more people began searching for it.
Nowadays you will not have any trouble at all in finding the "King of Wings". It is even marked on Google Maps!
Nevertheless keep in mind a famous quote by Albert Einstein:
"The one who follows the crowd will usually get no further than the crowd. The one who walks alone, is likely to find himself in places no one has ever been." Wise words and we really can't recommend enough doing some "coddiwompling" on your own! We found quite a lot of interesting hoodoos while searching for the "King". And who knows what is still out there in the San Juan Basin just waiting to be found and photographed!? ;-)

One year later, in fall 2009, we returned to the "King of Wings" hoping for some more drama in the skies at sunset. That's when this month's image was taken.


Related links: Please feel free to check out all our other "USA Images". Thanks for your interest!