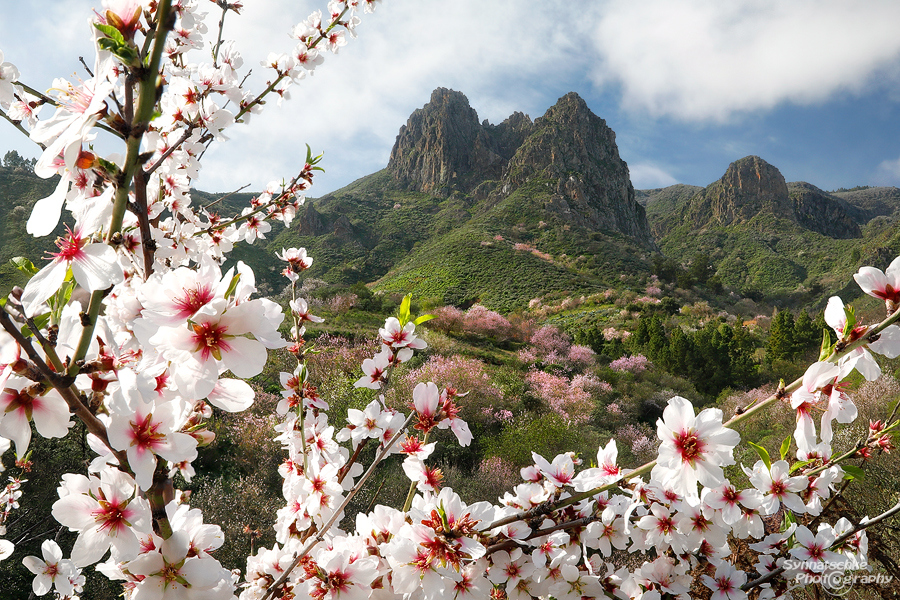 Spring is in the air

Last month's image was already dedicated to the "Almond Blossom" at Gran Canaria. Since we love springtime and flowers a lot, here is another one from our trip in late January. We just wish we could also give you a sample of the enchanting sweet smell of all these blooming almond trees!
They offer some good photo ops during the day as well, so Steffen and I did a lot of scouting and hiking in the mountains and we found some spots we really liked. And as always there was some luck involved. Just about half an hour after we took this image, fog moved in dimming the sunlight and letting the green mountains disappear for the next couple of hours. There is a reason why the north and east facing mountain slopes at Gran Canaria look that green and feature such a lush vegetation. The humidity is usually high due to the cold Atlantic Ocean and the trade winds known as "alisios". Fog and drizzle are pretty common at the northern part of the island, while the southern part suffers from the prevailing drought.

Spring seems to be "eternal" at the Canary Islands. You will always see blooming hibiscus, strelitzia, bougainvillea or jacaranda and flame trees in the towns, even during the winter months. The almond blossom usually takes place from mid January until mid February (-> best time), followed by beautiful spring plants such as the yellow flowering Tree Aeonium or the Giant Fennel and by the also incredible bloom of the Tajinaste (first the white flowers will show up, then the blue ones in March; the XXL Tajinaste rojo only grows at the neighboring island Tenerife and blooms from April until early June).