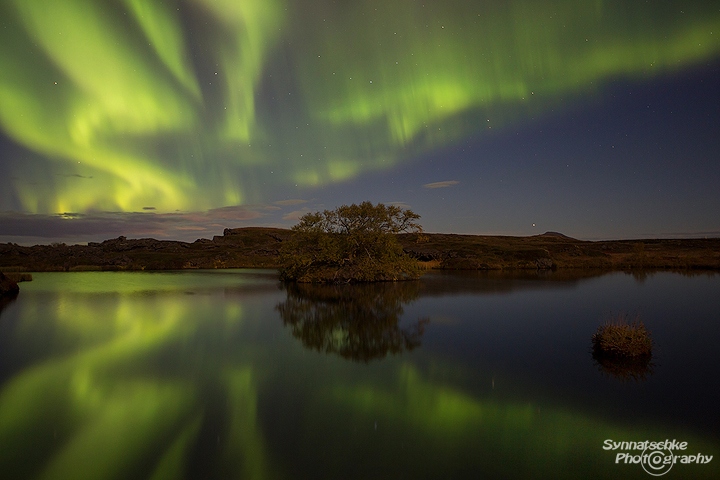 We just returned from Iceland and brought home quite a lot of new images. During 6 nights (out of 15) we saw some green aurora arcs and colorful lights dancing all across the arctic skies. And during the days we were either sleeping or shooting the beautiful fall foliage.

Due to unstable weather conditions, we had to skip most of our plans for the Icelandic Highlands. It was too rainy and way too windy (to say at least...) for all the hikes we had planned to do and all the remote areas we were so much looking forward to exploring. But that's Iceland, you always need to have a "plan B" or even "C" or "D" for your trip. We are already used to it and were fine with that, since we had a great week at Lake Myvatn instead.

The Northeast was the only place on the whole island where the forecasts looked promising with calm winds and hardly any rain showers. And the most important, it was the only spot where the skies at night were supposed to be partly clear. We were expecting a geomagnetic storm to hit the Earth again, originating from the same sunspot that delivered an amazing show by mid August. It happened on the night of August 23rd/24th and it was the very first big northern lights display of the aurora season 2016/17. Back then, we were so happy that one of our best friends was able to enjoy it in Southern Iceland!

And we were also happy because we knew that there was a slight chance that the sunspot responsible for that great show could "survive" its trip around the far side of our sun and face the Earth again in about 4 weeks. And by then, we would be in Iceland - hopefully at right place at the right time.
And well, we were lucky. This month's image was taken during the early morning hours on September, 21th 2016. Also the day before and after that, there were some really crazy aurora swirls or at least green arcs spanning the northern horizon.

It's a given fact, that aurora displays can't be fully predicted and that you can never be sure of when and where the lights will show up. But as you can see, there might be some truth in the long-term northern lights forecasts as well!

Most people are only aware of the short-term predictions. When massive eruptions take place on the sun, a gigantic stream of charged particles might be released into space. If Earth is in their path, those charges particles will interact with the gases in our atmosphere, causing them to light up. Oxygen is responsible for the striking green and greenish-yellow hues as well as for the red lights. In addition to that, nitrogen can produce blue, violet and purple colors or deep (crimson) reds. The solar winds arrive within 2-5 days (depending on their speed!). That is the reason why forecasts are usually rather short-termed and they might as well be completely wrong, in case the charged particles storm misses the Earth.

But the star at the center of our solar system rotates and a sunspot or large coronal hole, that generated a major geomagnetic storm, might be still active when it faces Earth again! Depending on its location, an active region might return in about 25 days if situated near the sun's equator or in more than 31 days if at the sun's polar regions. This is of course pretty vague, but there is always hope...! And we love to take a look at the long-term northern lights forecast as well. It is published and updated every Monday by the NOAA, the 27-Day Outlook.

And talking about predictions... there is another giant solar region active right now. It caused the fantastic aurora displays in early September and even better ones in late September (4 days in a row with a kp-index 5 or 6)! Chances are not too bad, that this solar region might still be active and provide another crazy show around October 23rd.
If you are heading north by that time, we wish you the best of luck!
Isa & Steffen