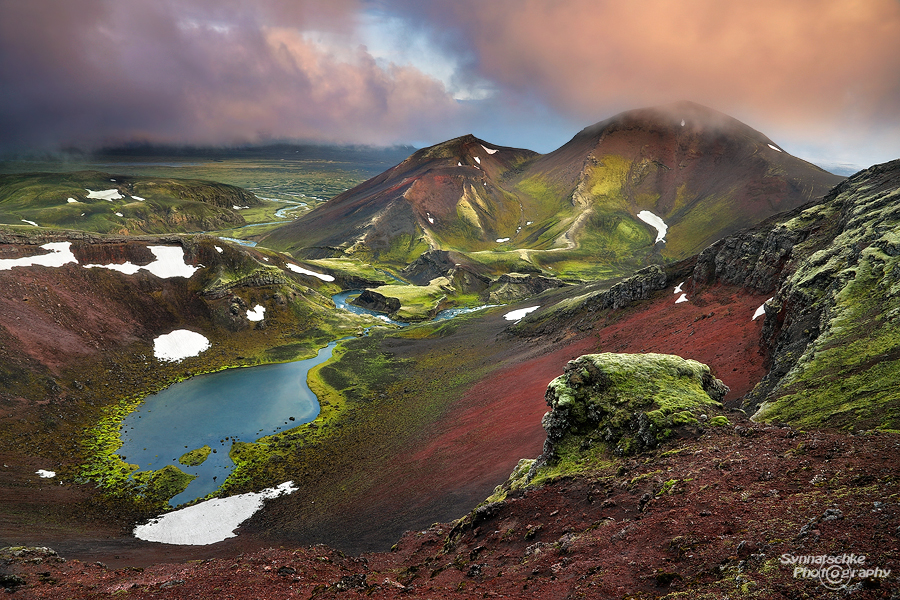 It's been quite a while since we last enjoyed the midnight sun under the Arctic Circle. So this year we decided to return to Iceland to shoot some of those fantastic everlasting sunsets followed by an endless sunrise. At least that's what we had hoped for. But usually when you travel to Iceland hardly anything works out as planned. The weather has a mind of its own, especially this year. During the months of June and July people living in the western parts of the country just saw the sun for a mere few days. The grayest and wettest summer since 1914 - and Steffen and I right there just in the middle of it!

Well, we tried to make the best out of it by skipping most of the highland locations we had been wanting to visit. There was just rain, rain and even more rain at all the areas surrounding Myrdalsjökull (including all Fjallabak, Landmannalaugar etc.) and whenever a short rain break happened, the Icelandic meteorologists issued yellow weather warnings for the highlands. So just like a couple of times before, many of our anticipated exploratory trips had to be postponed once again (hopefully to the near future...).

But at some spots we did have some luck though, as you can see on this month's image. We were sitting for quite a while at the rim of this remote red crater in the Icelandic Highlands facing dense fog and almost zero visibility. Then suddenly within seconds the scenery changed dramatically. A strong breeze moved the fog and the clouds with high speed and just before midnight, when the sun was about to set, it bathed the fog in an amazing golden light. So glad we had our cameras set up on the tripods ready to shoot! The magic lasted but 2 or 3 minutes! After that the "initial state" was soon restored and we couldn't see the small crater lake anymore and sometimes hardly notice  the hand before one's face...

Right place, right time. Just like a couple of days earlier when the weather forecast enticed us to pay a visit to famous Lakagigar. The midnight sun did not show up as planned, but at least it provided us (many hours later...) with one of the craziest sunrise moments ever. Guess we will leave that story to be told another time, maybe when showing next month's image... ;-)

But we weren't always that lucky. Dense fog was the key problem during our this year's summer trip to Iceland. Since we followed the sunny weather by driving back and forth between the East and West Coast, we almost had no rain at all. We cancelled every single reservation we made before and we decided to never ever book any room in Iceland more than 2 or 3 days in advance (besides the first or last night near the airport). It simply doesn't make any sense due to Iceland's most unstable and unpredictable weather. The only room we kept this time was at the East Fjords in Bakkagerdi (one of the best viewing place for puffins in Iceland), but just because this was a lucky strike and the perfect day for a visit.

Besides the puffins, the time around summer solstice is the best for shooting lupines. They were all over the place and I can't remember seeing that many flowers last time we were there in late June and early July. We loved them during foggy days, we loved them at sunset, we loved them with sweet little sheep lambs in between them, we loved them with waterfalls in the background, we even loved them for selfies... And above all we loved them for remaing so incredibly still for most of the time. Due to our "nomadic journey" we almost never experienced any annoying winds along the South Coast. Those are really fantastic and rare conditions for Iceland. So we definitely can't complain. Except that Icelandic weather forecasts don't do well at predicting foggy days or at announcing a bank of clouds/fog at the northern horizon hiding the low sun and preventing the skies and clouds from turning reddish. But nevertheless for one of the worst summers on record, our 2,5 weeks in Iceland weren't too bad after all and we came home with quite a few keepers again... Just as every time, when returning from Iceland... ;-)