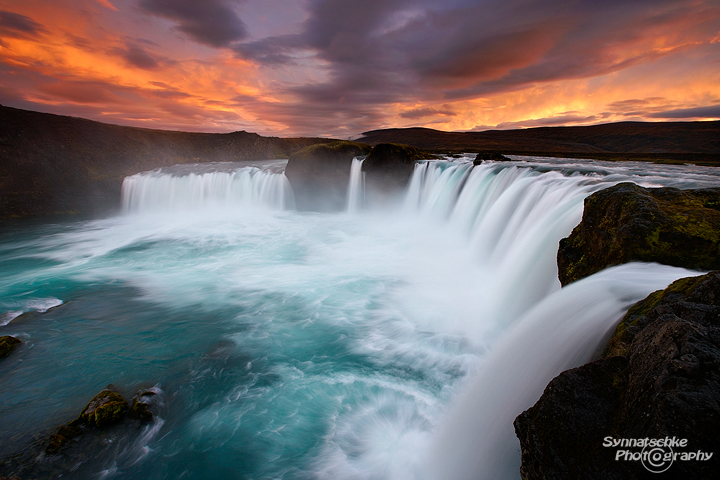 Sunset at Godafoss in Northern Iceland

Here is another preview image from our last trip to Iceland. Along with the previously mentioned Northern Lights Displays we also had quite a few spectacular sunsets. This one at the so-called "Waterfall of the Gods" (Godafoss aka Goðafoss) in Northern Iceland was one of the best we have ever seen. And it all happened so suddenly we could hardly believe it.

Steffen and I didn't take a single picture during the whole day due to the messy weather; we were only driving around and doing some scouting near Akureyri. Then we skipped dinner there just for the unlikely event of the sun being strong enough and breaking through all those clouds at the end of the day. We stayed in our car at the new parking lot on the southern side of Godafoss, since the skies didn't look promising at all. But we were at the right place at the right time, and just a couple of minutes later we found ourselves in a mad rush to get up to the edge of the canyon on the other side of this tremendous waterfall. And only a few seconds later the whole sky was on fire and the clouds were literally burning. There aren't words to describe this (at least not in my "English vocabulary" :-) ) and also pictures don't do it justice. So unbelievably beautiful!

And the best part of it: This craziness lasted a whole (crazy) hour! Hardly anything rivals the midnight sun in Iceland and those everlasting Nordic sunsets. We thought they would only happen in summer, but we were wrong. To our surprise they can be just as fantastic by mid September, but of course quite a lot shorter. Nevertheless there was even time to head back to the other parking area and take some images of the Godafoss waterfall from that point of view as well.

What an evening! We definitely do not mind waiting for hours (in fact a whole rainy day...) just to able to have such a show! Iceland at its best! :-)

Related Links: More images from Iceland coming up soon! And the "Best of" hasn't been updated since 2014, we need to do that a.s.a.p.!