Scroll
Wildflowers in the US Southwest
Iceland - Sunrise at Dyrhólaey

We just updated our "New Work Gallery" with 50 images from our last trip to Iceland in September/October 2020. We felt extremely lucky being able to travel during pandemic times (this island is the perfect place for social distancing! :-) ) and also because we were gifted with an early winter storm. It kept us indoors for quite a while due to high wind gusts up to 130 km/h (~80 mph, that's already a hurricane force wind!), but it also blanketed the peaks at Snaefellnes providing a pretty unique contrast to the red craters and all the colorful fall foliage on the mossy lava. We were told that sometimes it does not snow at all until Christmas there.
The landscape looked extremely scenic and we spent a couple of days at Berserkjahraun and other volcanic areas waiting for the best light. And besides that, we finally got an image we were looking forward to for quite a long time. When we arrived at the small town of Arnarstapi to shoot the famous sea arch Gatklettur at high tide the wind gusts were so strong that we could hardly stand on our feet. But the sun managed to break through the clouds in the late afternoon and a rainbow showed up that seemed to last forever. In fact it did not disappear for about 2.5 hours because of the constant drizzle. Probably the craziest rainbow we've ever had!
The storm was supposed to calm down that day and the weather forecast was right. As soon as we felt safe we went out to the cliffs. The sea was still very rough and the waves kept crashing through the big opening and sometimes also reached as high as the smaller second arch on the right side of Gatklettur. That's when we caught this special moment shown on this month's image.
Autumn is supposed to be the windiest season of the year. But the notoriously variable Icelandic weather is always full of surprises. After the big storm we enjoyed two weeks of serenity and calm days. Just about perfect for shooting fall foliage and for capturing the northern lights reflecting in the glacier lagoon. Our trips to the Icelandic Highlands came as a surprise (rather unlikely for this time of the year!) and we also managed to go all the way up to the glacier tongues of Myrdalsjökull, a hike we haven't been able to do up to now (the weather was always too bad for that during our late spring and summer trips). And last but not least there was our private tour to an ice cave at Vatnajökull. Island truly at its best! We will probably never get tired of doing photography there! To be continued... 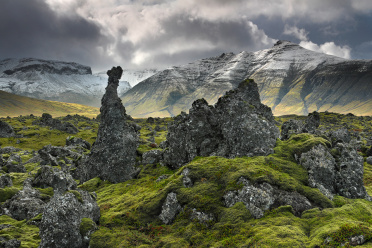 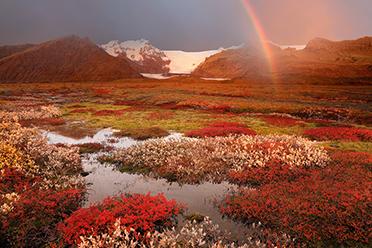