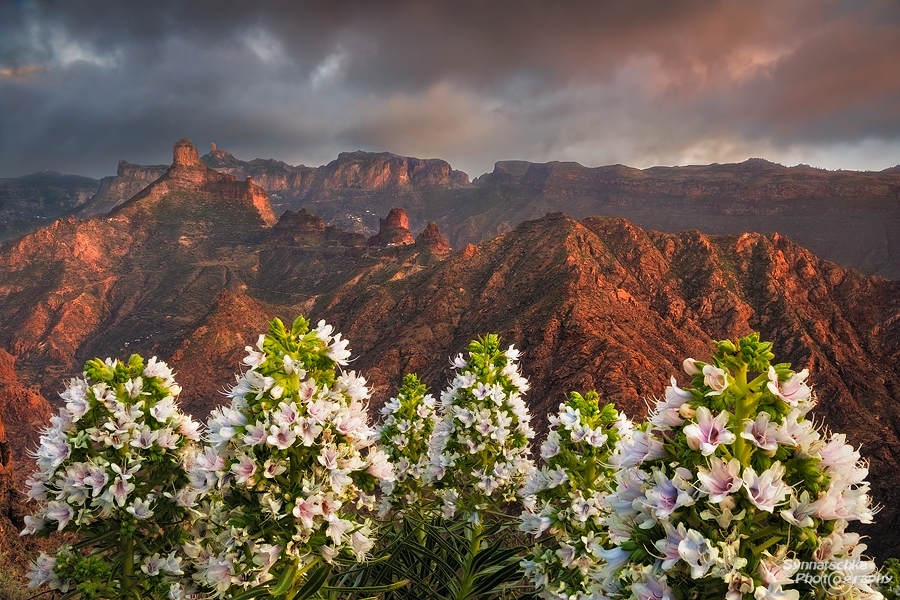 Due to their remote location in the Atlantic Ocean off the northwestern coast of Africa, the Canary Islands are home to some pretty unique dragon trees species as well as approximately 700 other endemic plants. More than hundred of the native plants can be found on Gran Canaria only, among them quite a few Euphorbia species. One of the Euphorbias really sticks out: the Euphorbia Canariensis commonly known as "cardóns". They bear a strinking resemblance to cacti because of the innumerous tall columnar arms arising candelabra-like from their base. They can be pretty photogenic, as you can see in our image called "Cactus Tower". We also fell in love with two other endemic plants which grow all over Gran Canaria: the "monkey palm" and "tabaiba dulce". We used both as a foreground on this "Roque Bentayga" picture.

But nothing can beat the showy flowers of the Tajinaste plants. Their long cone-shaped racemes come in all colors and sizes. By the end of January the white species will begin to bloom on Gran Canaria (Tajinaste Blanco, Echium decaisnei), joined by their close relatives in late February/March, the  Tajinaste Negro (Echium onosmifolium) which also has white flowers but broader leaves and the majestic Tajinastes Azul (Echium callithyrsum). The latter grow up to 4 meters (13 ft) tall and despite their name "azul" (=blue) there is also a pink and a bicolor variety. On the island of La Palma several white species bloom along the coast in February/March (Echium brevirame) and quite a few more up in the mountains in April/May. The supersize white flowers of the "pininana" (Echium pininana) are truly amazing in the laurel forests. But the most impressive species is without a doubt the Echium wildpretii. Their XXL-racemes reach for the sky and can be up to 3 meters (10 ft) long! On La Palma there are some pink subspecies (Echium wildretii trichisiphon) and on the island of Tenerife the red ones are called Tajinaste rojo (Echium wildretii wildpretii). These endemic plants grow in higher altitudes and usually flower in May and June.

This month's image was taken last January during our stay at Gran Canaria. It shows a single Tajinaste Blanco plant at the edge of the ancient caldera of Tejeda with Roque Bentayga and Roque Nublo in the background. If you happen to be on the Canaries in late winter and during springtime be sure not to miss the fantastic Tajinastes and in January of course there is also the unique almond tree bloom.
You will find more images from this island in our "Gran Canaria Gallery".