Scroll
Leaf-Peeping in the Rocky Mountains
Geothermal Areas in Iceland

Sunset at the Alien Throne 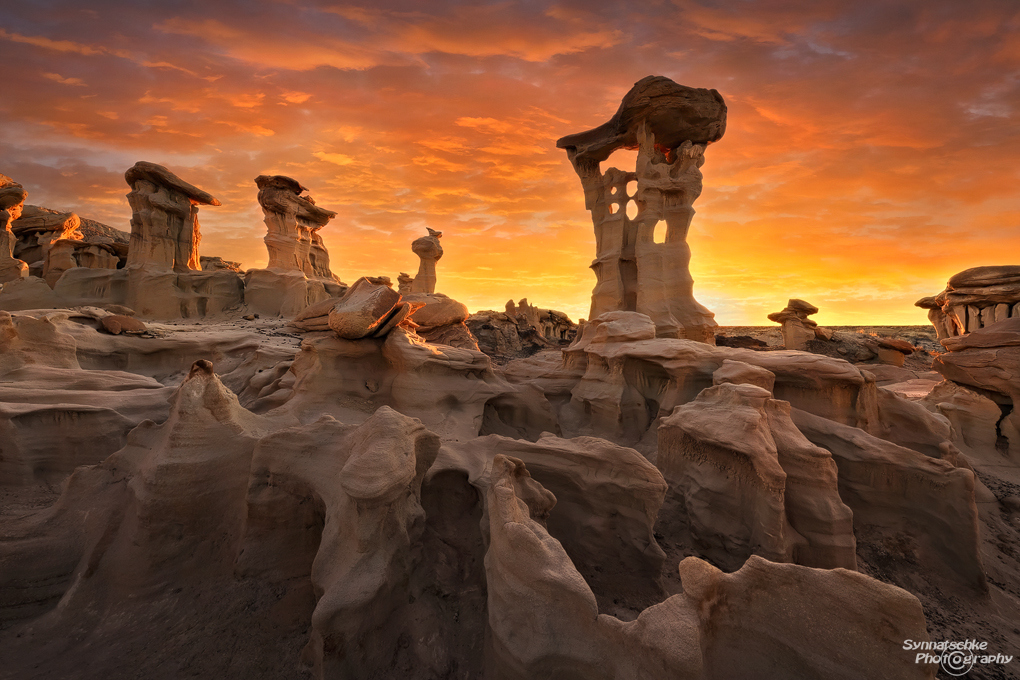 Sky on fire after heavy rains

On our last photo trip, we did a lot of leaf-peeping in the Rocky Mountains, but we also spent some days in the Hanksville area, around Moab and in northern New Mexico. Steffen and I flew in from Frankfurt (Eurowings Discover is offering a new non-stop flight to Salt Lake City) and we covered a lot of ground while in the US. There were quite a few storms in the forecast, so scheduling this trip wasn't easy. We drove two times all the way to Hanksville and also twice down to New Mexico - always hoping to catch a perfect sunrise/sunset. And luckily, we were blessed with quite a few terrific light shows. Some of them came totally unexpected and out of the blue like the one at Kebler Pass (it started raining right at sunset), while others were long-awaited. Despite the pouring (all-day-long...) rain at Canyonlands National Park we didn't lose faith while at Grandview Point. We spent the whole afternoon in our car waiting and hoping for a big showdown. And it turned out to be one of the most impressive sunsets we have ever experienced - rather a short one, but absolutely fantastic -> Sunset at Grandview Point. And we enjoyed another "sky on fire" while shooting sunset at Arches National Park and a receding rain and fog at Fisher Towers after sunrise.

In New Mexico our main focus laid on the San Juan Badlands. We wanted to redo our old image of the "Yellow Hoodoo Gang" that we took long time go, back in 2007 and with an old camera. But our return to Ah-Shi-Sle-Pah Wilderness was truly depressing. All those beautiful hoodoos lost their caprocks, either by natural erosion or it was human caused. Unfortunately I can't rule out the latter... This group of hoodoos was so scenic once, now it just looked "defaced", since the old caps had been replaced by really ugly smaller ones. There were new caps even on hoodoos that never had one!

At least the Alien Throne did not disappoint. We had been close to this area while searching for the King of Wings (-> Finding King of Wings), but never right at the Throne. So it really was about time! And we were thrilled, this area has so much to offer! Incredible fragile hoodoos, incredible large balanced rocks and incredible large hoodoos (the Alien Throne is roughly 3 m/10 feet tall!). And there were fields of blooming desert sunflowers everywhere near the badlands, also in the Hanksville area and along Interstate 70. Soooo beautiful!

We were less excited about the road conditions, however. Some of tracks around Hanksville deteriorated so badly, they were impassable and we had to deal with critical situations. Same happened at the San Juan Badlands. Some of the dirt roads out there were partially or totally flooded. And our rental car, a Jeep Compass Sport, was not exactly the best SUV. It lacked clearance, and as we only found out after our trips out into the wilderness, it did not even have a spare tire...
So in the end, we really felt lucky twice: Not only because of the nice sunsets, but also because our car did manage all the roads bravely... ;-)

Related Links: Our images from the United States