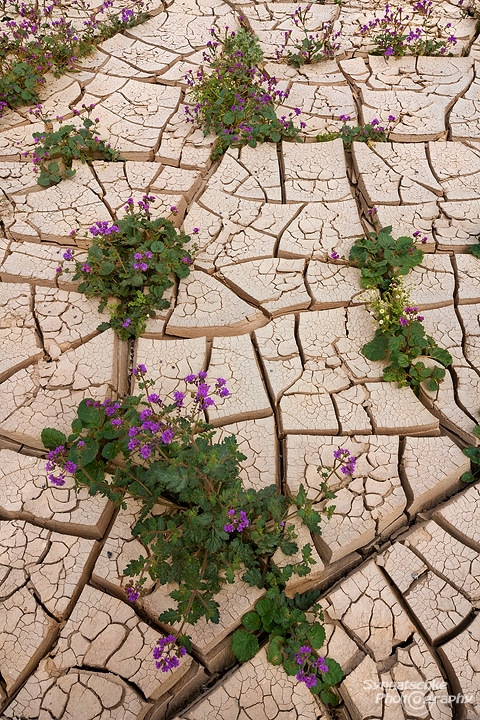 Just like last month we would like to dedicate this month's image to the Superbloom 2016 at Death Valley. We spent a couple of days in the National Park scouting for wildflowers. It's not that you needed to "scout" for them, they were hard to miss and practically ubiquitous - literally a "sea" of desert gold spreading across the flats and slopes around Badwater and near Mustard Canyon. Yellow blossoms everywhere, not just on the desert floor, but also in the social media and in the news all over the world... Probably the reason why we also kept looking out for other blooming beauties. We were in search of some different kind of Death Valley wildflower images, different than the ones that we were already familiar with.

First we fell in love with the sand verbena (and their incredible sweet fragrance) at the remote Ibex Dunes, but after a wonderful sunset at their foothills (image) we continued searching for more. And after several miles out there in the desert - driving along Hwy 178 beyond Badwater, parts of Harry Wade Road, the West Side Road, Titus Canyon Road and the one through Mud Canyon - we found our "very special place". A small mini-playa where some Phacelia plants (also known as "Scorpionweed") just seemed to miraculously grow out of nowhere. Lush green leaves and purple blossoms popping out from within deep cracks in the mud.

It was so amazing seeing Death Valley, one of the driest deserts on Earth, to come alive like that!

Unfortunately it was quite windy the day we found this particular spot. And besides that, the sunlight was harsh and provided too much contrast for flower close-ups. We brought a diffusor/reflector along, but some of our favorite compositions encompassed an area definitely too large to be covered safely with a diffusor. So we returned two days later - glad it was overcast then - for a softer and more flattering light. And we spent quite a lot of time just standing there gazing in amazement... and of course taking some pictures! ;-)